How to Spot a Scam

One thing we hear a lot from people that are looking for a doberman puppy or interested in our doberman stud service, is that there has to be a catch. Especially when it comes to those interested in our stud service, they find it hard to believe that they were able to find people that are knowledgable, flexible, but most of all, friendly! They say that they have called lots of different breeders or stud owners, and that they're initial dealings with us are so easy and pleasant that something must be amiss! I'm not bringing this up to brag about ourselves, but to illustrate the main points when it comes to what makes us different from other doberman professionals, and what to look out for when it comes to avoiding scams, whether you end up getting a doberman puppy or using our doberman stud service or not.

There are two main different kinds of scams when it comes to Doberman puppies:

1. The Doberman puppy scammers will get you to send them money and you will not receive a puppy in return, and you will not be able to get a refund or in contact with the scammers again.
2. The scammers will sell you a different puppy than the one you bought, or one that is sick or as health issues. Once they have your money and you have the puppy, you will find it almost if not completely impossible to reach out to them again.
​
​The first scam is the most common and obvious one. It's the easiest to complete and has the lowest amount of risk for the scammer. You likely won't even ever talk to them on the phone, they'll push you to send money via western union or have a paypal button on their website you can "put a deposit down for". You don't have too much recourse to get your money back depending on the method you send it. It's likely the scammers are international, and you wouldn't be able to take them to court. I searched through Google, "Doberman Puppies for Sale", and all three websites that had paid google to advertise their sites on the first page of search results were scams. We'll go over these sites, and what to look for that other scam websites will also have.

This review has nothing to do with a Doberman Breeder
I could go on, but the obvious scams should be very easy to spot and avoid now. The breeders who sell you a sick puppy, or a different puppy than the one you bought are much more difficult to spot until you've already been cheated. These types of unethical breeders count on you either not knowing their real names or real information, or that you just won't go through the trouble of filing in court. It's an extremely emotional and devastating event of having your new puppy get sick soon after you get them, the breeder offer's no support, you pay thousands in vet bills, and your new family member passes away anyways. A lot of people would rather move on from the sad events than relive their grief in court.

A brief disclaimer: not all of the things listed under red flags means that a breeder isn't legitimate or that they're dishonest. In our experience these are things to look out for, and to trust your instincts. Different personalities and opinions on how breeding should be done exist. We're not trying to disparage or hurt honest breeders who do things different than us.
​
Red Flags
Excuses: Throughout the process and especially when it's getting time to pick up your Doberman puppy, you will be peppered by different excuses for different things: "The health certificate couldn't be done for your puppy because the vet had an emergency surgery" . "We had a family emergency and you'll have to pick up from our neighbor/friend". I heard of a time where someone went to pick up the puppy and the contract wasn't available to be signed by both the breeder and the new puppy owner. The excuse given was, "My printer broke so I'll just email you the contract." The buyer never did get the contract signed, and with it the health guarantee. Whenever you hear a lot of excuses for routine things that a professional would have no issue handling, pay closer attention.
Not Let you See the Puppy Beforehand: To preface this, being worried about parvovirus is a legitimate worry for any breeders, but especially by their second round of shots, with certain precautions most reputable breeders should be okay with you meeting your future doberman. Potentially disreputable breeders will say they're too busy, send grainy photos, or put off sending any photos at all until it's time to pick up. You'll want to see the puppy before if possible, and if not, get hi-res photos and video.
​Lack of Information about the Parents/Health Testing: They're unwilling to send you or let you see the parents AKC certificate and health testing information. I was once speaking to a breeder who refused to send me their dog's pedigree, as "she wasn't going to be scammed." There is no way to take a dogs pedigree and "scam" anyone with it. Anyone that is legitimately worried about that, you should steer clear from. Same goes for health testing. if someone took on of our dog's health testing images and posted it on their website, that doesn't mean much. Our dog, not theirs, is DNA registered with AKC and OFA. All fo our dog's paperwork can be easily and always accessed from our website and their personal page.
Lack of Application/Bill of Sale/Contract: Any reputable doberman breeder is going to want to make sure their doberman puppies are going to good homes. This requires potential clients filling out a lengthy application, speaking to them on the phone and getting to know them. When you pick up your doberman you should expect a bill of sale and a contract that you and the breeder both sign. If you pick up your doberman puppy and there's no paperwork, you have no responsibility to the breeder, but they have no responsibility to you either. Any verbal agreement will likely not hold up in court. This is important when it comes to health guarantees, and registration status. 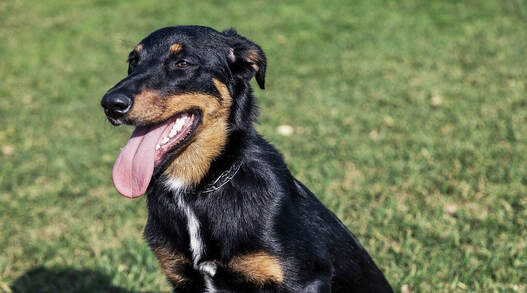 "Purebred Doberman for Stud!"
We'll use the word scam here to mean any dealings with a doberman stud owner that isn't honest, friendly, and open. We hear a lot from people from as far as Montana that they've been looking for a Doberman Stud that had lines they wanted, the look they wanted, and an owner they could deal with. We've heard people say they've been called names, hung up on, lied to, even the stud owner no showing when the bitch was in heat, and on and on. A few times, people inquiring about our stud service half jokingly said, "this must be a scam, I can't believe how easy you are to deal with." For some reason in this business, a lot of stud owners are not nice to deal with. It's why the vast majority of breeders have their own stud! A lot of the things to watch out for are the same as what to watch out for when it comes to Doberman puppy scams, as I've detailed above.

Common Issues:
Stud Owner Refuses to Approve the Litter on AKC. You rely on the stud owner to approve of the litter on AKC before they can be fully registered. We've heard stories of unethical stud owners refusing to, or holding the approval for ransom. The most likely reason for not approving the litter is either the stud they used is different than they one it was supposed to be, or they know that their stud as an outstanding issue with AKC. They may have failed their DNA test for frequent sires, or been dishonest another way. A way to avoid this is to find a reputable, professional that knows every step of the process. The stud should have no problem showing you pictures and information of previous litters their stud has sired, and would be willing to provide a reference upon request.
They Don't Have Full Registration Themselves: A lot of times a stud owner may not even have full breeding rights for the dog they own. Either they didn't get full registration themselves from the breeder they got the dog from, or they don't really even know where their dog came from. If you call AKC with the AKC registration number and owners name, they will confirm registration status for you.
No Health Testing: Even new doberman stud owners should have some basic health testing done. Even if it's just DNA testing for certain diseases/traits. If a dog has no health testing whatsoever, you would do best to look elsewhere.
We would love for you to give us the chance to give you an excellent, professional Doberman Puppy or Stud experience! Please don't hesitate to reach out or visit our puppy or stud pages for more information!